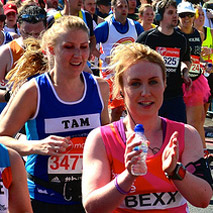 I have always found London Marathon the most emotional day of the year. Tears guaranteed. It’s up there alongside the opening notes of ‘Once in Royal David’s City’ from King’s College the week before Christmas and the poppies falling in the Albert Hall whilst a lone piper plays the Last Post on Remembrance Sunday.  Even the BBC trailer playing the theme music of the London marathon gets me.

Personally, my greatest ever distance was 10K.  Let’s be clear – that’s 10 kilometres which is around about 6 miles.  Hardly what you’d call endurance running.  I trained for months.  Up and down the beachfront, distance increasing each week.  10k was in the bag and I felt every inch the athlete.  On the big day my running partner gave me a serious pep talk before we started.  The deal was, he said, that we could go as slowly as I liked, but we were NOT to stop.  It will be fun, he said.  We would keep a steady pace, he would chat to take my mind off the passing miles, we would spend a happy hour enjoying the scenery and the camaraderie of our fellow runners.  All would be well.  He made me promise and we shook hands on the no stopping deal.  Off we went.  The fatal flaw in my training plan soon became clear.  Hills.  The beach has none but the course was full of them.  You don’t need to know the details but I confess to both stopping and crying.  A lot.  The final humiliation was being overtaken by a mum running with her baby in a pushchair.   I did eventually finish – thanks to cajoling and threats from my running buddy who won’t be making that mistake again.  It’s over a decade ago but I can still remember feeling utterly invincible when I finally crossed the line. 10K – whoo.  Bring out the flags.

I digress.  Back to the marathon.  Watch them in the flesh and the elite athletes are nothing short of awe inspiring.  Incredible muscle tone, stamina beyond belief and a flawless running style.  But it is the ‘normal’ runners who inspire me most.  The ones who have wobbly bits and hand-written messages on their T shirts.  The ones who are still going when they open up the roads to traffic again.  The ones who develop ‘spaghetti legs’ in the last 100 yards but are still smiling.  The ones who have stuck a metaphorical two fingers up to cancer, heart disease or any number of other nasties.  And it’s not just the runners who are special.  I’ve been part of the marathon crowd in both London and New York, cities where you normally keep your head down and make eye contact with no one.  Even commuters who see the same faces every day fix their eyes ahead in pursuit of anonymity. But on marathon day the rules change.  Everyone is a friend you haven’t yet met.  Swap life stories with a guy on the tube, hug sweaty runners, share your packed lunch with a random stranger on the sidelines who saves you a space, shed tears at the stories of adversity and courage.  Think ‘thank God that’s not me running’.  Think ‘I wish that was me running’. It is everything that’s fabulous in the world in one day. It makes you feel that anything is possible.  And perhaps it is.