Fifty, faintly surprised but determined to be fabulous 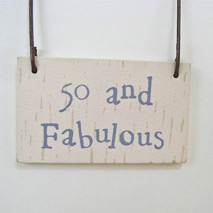 Tomorrow I will be 50. I have double-checked a number of times and it’s definite.  No longer 40-something, but 50. There will be no pretence or coy denial; for the record, I am delighted and perversely proud to be 50. Rather like my grandfather who, at 99-and-a-half, has reverted to childhood and consistently tells his age in fractions, you won’t catch me hiding from my rather impressive years.

Nonetheless, being 50 strikes me as faintly ludicrous.

The thing is, other people are 50, not me. Being 50 means a pension plan, sensible shoes, a kneeling pad for the garden and being strangely drawn to those classified ads in the back page of the colour supplement.

After some careful research, it all becomes clear.  Turns out that being 50 is no longer a fast track to an elasticated waistband, stewed fruit and a stairlift.  I am going to be a different kind of 50 to the 50 that my grandmother was when I was born.  50 is barely middle aged.  Indeed 50, it seems, is the new 30.  My grown up friends (because surely at 50 one must, albeit reluctantly, accept being grown up) are going to festivals, starting new careers, running marathons and travelling the world. It is the perfect age to start throwing caution to the wind, taking risks, doing what I want to do and being who I want to be.

I’ve reflected on my 50th year; a year in which, amongst other things, I became a Trustee, celebrated our 5th wedding anniversary and fulfilled a lifelong ambition of running my own business.  Being this old is rather liberating.  Old enough to have made plenty of mistakes, mature enough to own up to them and move on.

It’s been an outstanding year so far.  I realise that that the rather brilliant thing about being 50 is the confidence to just go for it. To say yes more often. To bounce back from the stuff that backfires. To enjoy success and be dignified in failure. To cherish the people who bring happiness and to quietly turn away from those who don’t.

Life is good. In the words of Toby Jones, who played Neil Baldwin in the BBC’s award winning screenplay ‘Marvellous’, ‘I’ve always wanted to be happy, so I decided to be’.